A lot of stories have inferred or stated that Bob Iger, Bob Chapek, and other Disney executives are taking a pay cut to help pay castmember salaries.

It doesn’t look that cut and dry, but Forbes’ Madeline Berg did well to explain the moves:

With theme parks closed, production shut down and movie theaters shuttered, Disney, like every major Hollywood studio, is losing billions due to the coronavirus. In response, chairman and former CEO Bob Iger has decided to forego his multimillion-dollar salary, while current CEO Bob Chapek will take a 50% pay cut.

Iger’s base salary is $3 million. Chapek makes $2.5 million. According to Forbes, other execs will take 20-30% pay cuts.

Another prescient explanation of today’s news came at the end of a Monday Slashfilm.com article by Hoai-Tran Bui:

The top brass taking pay cuts is a good move from Disney, which employs thousands of workers across the world. In a massive company like Disney, it’s often the lower-paid workers who are affected first by financial downturns like the one we’re currently experiencing, but Iger and Chapek’s salary cuts could slow lay-offs, or at least be taken as a gesture of goodwill. 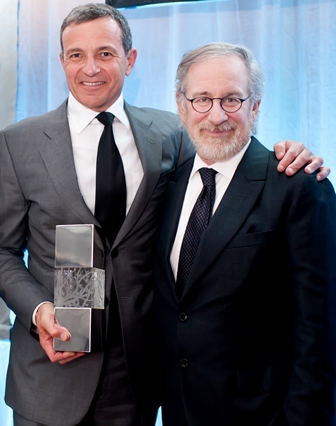 Meanwhile, Iger donated $500,000 to Los Angeles healthcare workers, seniors, and the “worst off” during the COVID-19 crisis.

Clearly, the current news is on the mind of the former Disney CEO, who later tweeted:

Watching the news & feeling sad for our world. For weeks, medical experts exhorted us to exercise extreme caution, to stay home, to create social distance. Trust THEM! Heed THEIR advice & for heaven’s sake, support the medical personnel who are fighting valiantly to save lives.